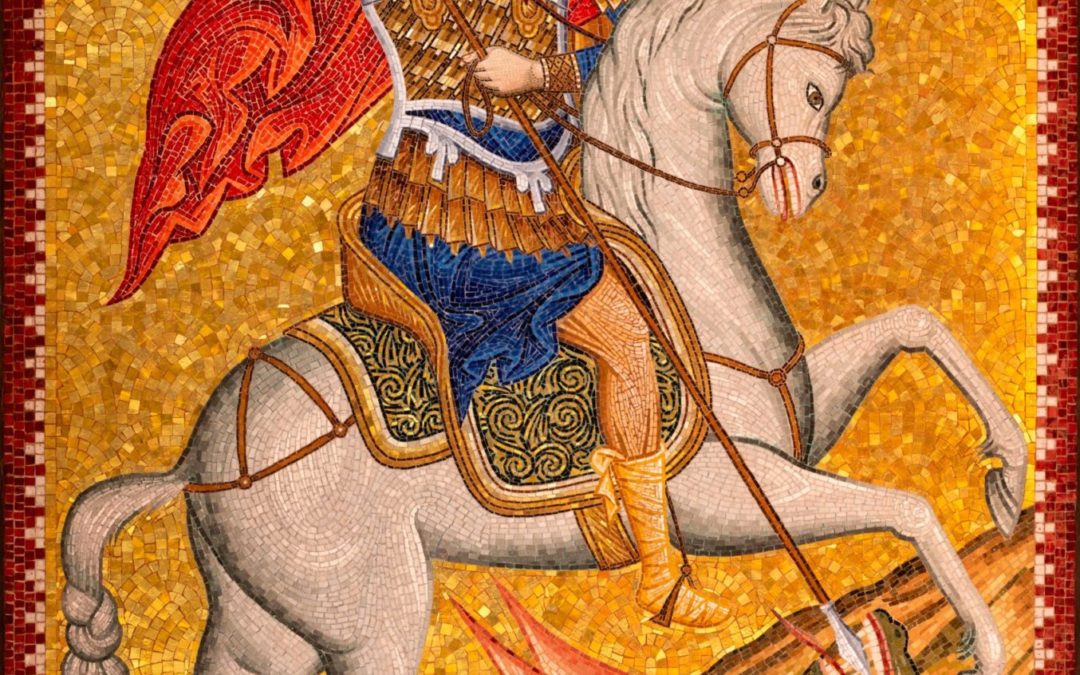 The martyr St George, chosen by Baden-Powell as the patron saint of all Scouts of all branches, is celebrated by the Church on 23 April, which is also therefore Scouting Day. It is on this day that every Guide and Scout renews and remembers his or her promise.

St George is undoubtedly one of the oldest and most beloved saints of the Church, both East and West. He is also the patron saint of several cities and countries, such as Portugal and England, home of Lord Baden-Powell, founder of scouting. In fact, several British kings have been named George (for example, Queen Elizabeth II’s father was King George VI, and one of his great-grandsons is named George). On this day we also celebrate the feast of the Holy Father, Pope Francis, whose baptismal name is Jorge Mário!

George, born in Cappadocia (a region in present-day Turkey) at the end of the 3rd century, was a Roman military man (tribune). He was martyred, by order of the Emperor (we do not know which one), for not having denied his faith in Christ. It was a time of great persecution. Many renounced their faith in Jesus. Only the truly strong men and women of all ages, nourished by the Word and the Eucharist, were able to witness to the Lord with their own lives.

The dragon that frightened the people of Silena

Most of us remember the beautiful image of Saint George on his white horse, slaying the dragon. We find this story in a famous book by the Dominican Giácomo de Voragine (Archbishop of Genoa, Italy), from the 13th century, called Legenda Aurea. In this book, before telling us about the martyrdom of Saint George, the author tells us how the saint saved the city of Silena, in the Roman province of Libya (North Africa).

In the large lake next to the town, a dragon was hiding, threatening the safety and peace of the local population. To prevent the monster from approaching, the inhabitants gave it two sheep every day. When the sheep began to run out, the town council decided to give the animal a sheep and a human being from among the young men and women of the population. Let us observe the symbology of the story: evil, vice, symbolised in the dragon, had consumed the livelihood (the sheep) and the lives of the young people of the population. 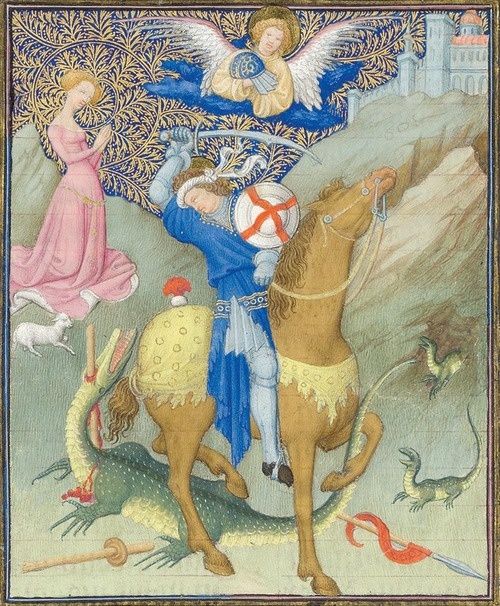 George and the dragon

After some time, chance finally comes upon the daughter of the town’s king. Bitterly, the king bids the princess farewell. She comes to stand by the lake, waiting for her end. It is precisely at this moment that young George appears there. Seeing the young woman crying, his Christian knight and brave heart cannot resist. He comes and asks her what is wrong. The young woman asks him to leave quickly, lest he too be devoured. George does not lose his temper and waits for the princess to tell him the story. As a Christian and a brave young man, he could not abandon this fragile girl to the clutches of the evil one. It would be such a disgrace! Instead of running away, George stands firmly by the young woman in danger, comforting her. Let us never forget: the strongest must always protect the weakest.

While they are still talking, the dragon pops its head out of the water. The princess screams in horror. George immediately mounts his horse, protects himself with the sign of the cross and, with the boldness and freedom of God’s children, attacks the dragon. Vigorously wielding the spear, asking for heaven’s protection, he strikes the monster and throws it to the ground.

With the dragon wounded, George asks the princess to put her belt around the beast’s neck without fear. The dragon follows, like a tamed puppy. When we act with the strength of God’s grace, any vice can be overcome, as the dragon was. Evil is never stronger than the good that comes from God.

The liberation of the city

George and the princess enter the city. The dragon is with them like a pet. One can imagine the horror that grips the population when they see this scene. Young George says: “Do not be afraid. The Lord has sent me to deliver you from the misfortunes caused by this dragon. Believe in Christ, receive baptism, and I will kill the dragon. Thus the king and the whole city were baptised. St George drew his sword, which he wielded with such skill (the result of long martial training) and put an end to the beast’s existence. It took four pairs of oxen to drag the dead beast out of the city walls of Silena!

George knew that killing the dragon would not be enough. If the people of the town did not change their lives, did not receive baptism, they would always remain weak in the face of the other evils and monsters that approached them.

Friar Giácomo de Voragine also says that in honour of the Virgin Mary and George, the king had a great church built, under whose altar a spring of healing water appeared. The king offered George a huge sum of money. The young saint refused (we never charge for good deeds, as Baden-Powell taught). He asked the king to give the money to the poorest.

Before leaving, George gave the king four wise words of advice: take care of God’s churches, honour the priests, attend the liturgy carefully and never forget the poor. Then he greeted the king and left.

Patron and intercessor of Guides and Scouts

The beautiful story of St. George, the great devotion that our people have for him, the countless miracles worked through his intercession over the centuries, his firmness of character, facing evil and martyrdom without ever losing his calm (the fruit of his trust in Christ), make us thank God for having given him to us as the patron saint of the Scouts of the whole world, of all branches! May his strength and goodness be an inspiration for each of us, guides and scouts, in our earthly pilgrimage towards Christ!

May Saint George intercede for each of us, for the Movement and for the Holy Father, Pope Francis, who received the name George at his baptism!