Recognition Decree of the UIGSE-FSE by the Holy See

PONTIFICAL COUNCIL FOR THE LAITY

The « Union Internationale des Guides et Scouts d’Europe – Fédération du Scoutisme Européen » was born during a meeting between young German and French chiefs on November 1st 1956 in Cologne, Germany. After that meeting, an international association of scouts was founded, according to the spirit of some founders of Catholic scouting, such as Father Jacques Sevin, sj, Professor Jean Corbisier and the Earl Mario di Carpegna, who tried to introduce the educational programme of scouting into the Catholic spheres of the early 20th  century. The French couple Perig and Lizig Géraud-Keraod deserves quite a specific mention because, being responsible for the Union for several years, it contributed to give it great strides.

For almost fifty years, the Union has developed a specific educational programme, conceiving scouting as a means of apostolate within the Church for the human and christian formation of youth, within the framework of universal vocation to holiness to which all Christians are called (see Dogmatic Constitution of the Church Lumen gentium, 40). As it can be read in its Federal Statutes, “the Union aims at gathering, in one same community of faith, prayer and action, the various national associations of the European Guides and Scouts, the fundamental objective of which is to educate young people by using Baden Powell’s traditional scouting methods, based on the Christian values at the roots of our common European civilisation” (Federal Statutes, 1.2.1.).

Scouting lived in the Union relies on three basic points: the Promise, the Law and the Scout or Guide Principles (see Federal Statutes, 1.3.), lived according to the requirements of Christ in the Sermon on the Mountain, starting with the eight Beatitudes (see Mt 5, 3-10), symbolised by the eight points of the Malta Cross, official emblem of all associations that are members of the Union.

The Union considers at its Charter the words given by His Holiness John Paul II during the General Audience of August 3rd 1994 in the Vatican Basilica to the Guides and Scouts of Europe coming from fifteen countries who had gathered for their second Eurojam (see Insegnamenti di Giovanni Paolo II, 17/2 [1994], pp.104-106). This speech marks a fundamental step in the life of the Union, as it is the source of its go forward action plan.

The Union welcomes as “associated” some associations belonging to other Churches and Ecclesial Communities reflecting and respecting the principles of the Catholic Church about ecumenism and of the dispositions contained with in the Religious Directory of the Union.

The Ecumenical Council Vatican II and the post-council magisterium have been particularly aware of the participation of associations to the life of the Church, showing thus deep esteem and great consideration towards them (see Decree on the Apostolate of the Laity Apostolicum actuositatem, 18, 19 and 21; John Paul II, Post-Synod Apostolic Exhortation Christifideles laici, 29).

In this same line, at the threshold of the third millennium, Pope John Paul II writes that “the duty of promoting the various types of associations is very important for communion, be they more traditional forms or newer forms of Church movements; these forms go on giving to the Church a vivacity which is a gift of God and which constitutes an authentic “spring of the Spirit” (apostolic letter Novo Millennio ineunte, 46).

Answering to the request presented to the Pontifical Council for the Laity by Sir Attilio Grieco, Federal Chairman of the Union Internationale des Guides et Scouts d’Europe – Fédération du Scoutisme Européen, soliciting the international canonical recognition of this federation, as well as the approval of its Statutes;

After many consultations and a deep study of the statute text;

Considering the favourable advice of Bishops from several European countries, wishing the pontifical recognition of the Union ;

Taking into account the will of the Union to keep links of fraternal cooperation with the Catholic International Organisations belonging to the scout movement and recognised by the Holy See;

Having seen the articles 131-134 of the Apostolic Constitution Pastor Bonus, on the Roman Curia, as well as the canon 312 § 1, 1° of the Code of Canon Law, the Pontifical Council for the Laity decrees:

Given in Vatican on twenty-six August two thousand and three, on the feast of the Blessed Virgin of Jasna Góra. 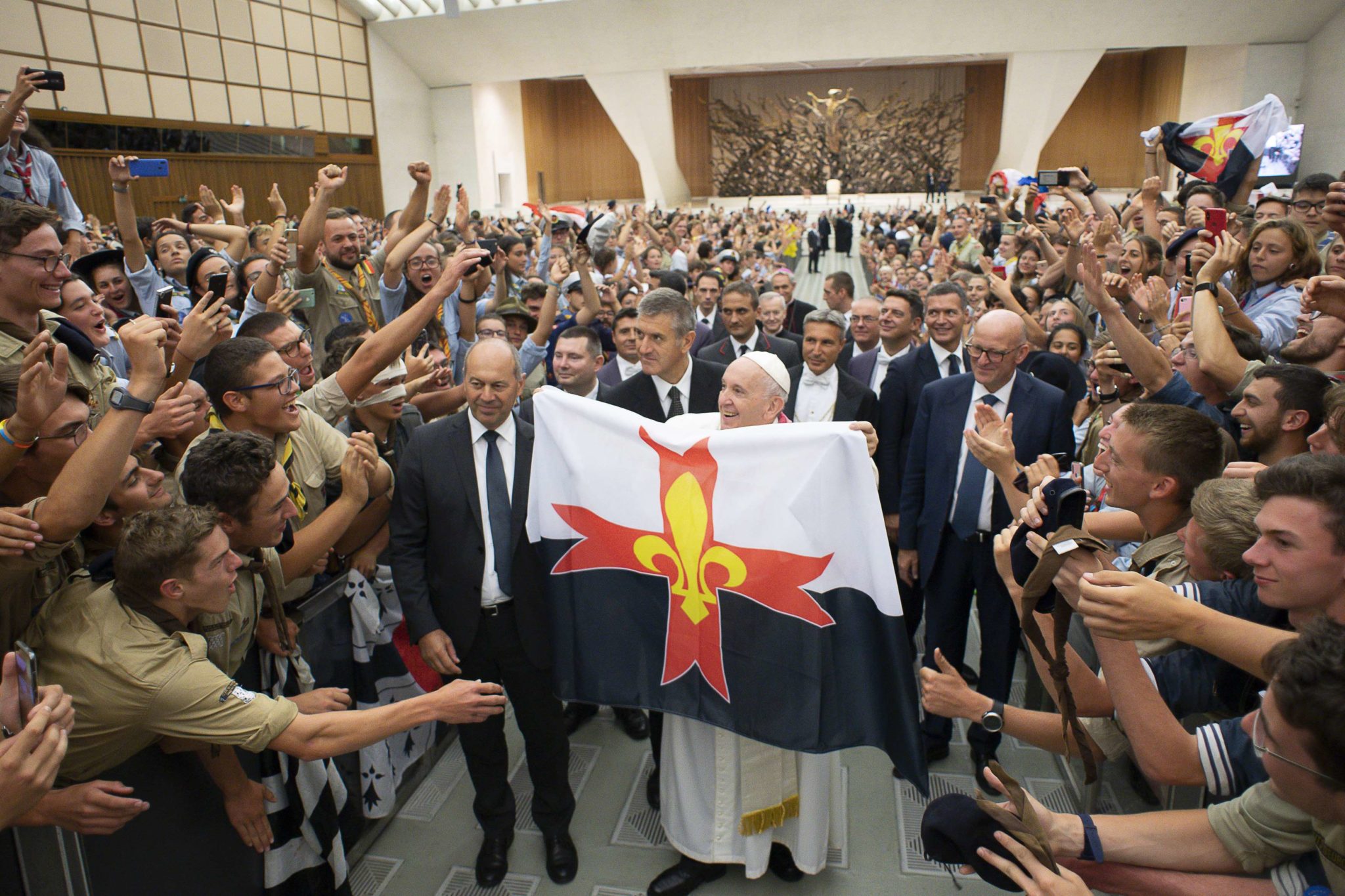