of the “Fédération du Scoutisme Européen”

“If the F.S.E.’s short term purpose is to create narrow links between European young people, its long term purpose, also eagerly desired, is to aim at the unity of Churches which have been separated for so many centuries. The scandal of division between Christian people and the necessity of working for the unity of the Mystical Body of the Church should constantly be reminded to the members of the Federation” (From the Religious Directory: Cologne, November 2nd 1957).

ART. 1. Scouting has been desired by its founder as an educational method, as complete as possible: it necessarily includes the religious education. “The scout is a believer and I repudiate all type of scouting that would not be based on religion” (Baden-Powell). It seems clear that the organisation needs of the scout movement cannot, in any case, prevail upon the education of its members. On the contrary, we must tend to settle structures allowing the full religious development of all young people: scouting is an educational method that must serve spiritual life, and not the reverse.

ART. 2. The Federation of European Scouting professes its Christian faith. It assumes all its acts and decisions according to the rules of this faith. The unity of Europe was realised thanks to Christianity. Christianity has constituted the animating element of a common European civilisation, with differences in its means of expression, but interdependent in its spirit, its social conceptions, its institutions and its patrimony of cultural values. The F.S.E. thinks that Europe may know a renewal of Christian civilisation thanks to men who will know that their supernatural destiny goes beyond temporal structures, and who will fulfil the requirements of the Gospel in their everyday life. The F.S.E. wishes to contribute to the unity of a Europe open to all countries of the world, working at giving birth to a new brotherhood of peoples in Christ.

ART. 3. The F.S.E. gives the primacy to each Christian’s vocation to holiness. A scout or a guide must follow his / her promise, principles and law according to the requirements of the Sermon on the Mountain, true Charter for any Christian life. In this sense, the F.S.E. is called to be ever more a means of sanctification in the Church, a means favouring and encouraging a closer unity between its members’ concrete life and their faith. In this aim, the F.S.E develops at all levels a specific pedagogy, particularly thanks to its magazines, its training camps for its chiefs’ formation, its national and federal activities. More particularly, the F.S.E considers that a differentiated education for girls and boys, within different units, constitutes an essential point of its pedagogy. The parallelism and the mutual enrichment of both sections, male and female, lead to the full flourishing of aptitudes and tendencies given to each sex by God’s Providence. As the law says, the scout or the guide is a friend to all and a brother/sister to any other scout/guide. This is why the F.S.E. belongs to the big scout and guide family and works with it for the edification of a more just and fraternal society, according to Baden Powell’s spirit and within the context of its original educational project.

ART. 4. A Christian belongs to Christ’s visible Church; he / she takes part in its liturgical and sacramental life and receives its action lines from the Church. If on the one hand, at the federal level, the Federation of European Scouting may not be totally linked to one Church only, any F.S.E. member must, on the other hand, belong to one Church or get ready to belong to it. The F.S.E. only accepts young people and associations belonging to one of the following Churches: the Catholic Church, the Orthodox Church or one of the Protestant Churches born from the Reformation, confessing Christ’s divinity and recognising the Apostles’ Creed as the faith definition. Any FSE scout or guide unit must have a clear position towards one of these Churches. Nobody can pronounce the scout (or guide) promise without being baptised. However it is possible to admit to the promise a scout (or guide) involved in the catechumenal preparation.

ART. 5. Each Church has a very precise conception of education. We cannot conceive that religion should be taught separately; it has to irradiate with its light all the knowledge communicated and all the activities which are developed. In a conception of scouting faithful to Baden-Powell’s thought, a separation between religious life and technical life should not be admitted in the unit. So the young people’s full religious development requires that their chiefs belong to the same Church as them, profess the same doctrine, take part in the same liturgical and sacramental life. This is why the F.S.E. considers as a normal situation when the national communities of European Guides and Scouts constitute homogeneous confessional associations, which are spiritually animated and guided by their Churches, as well at the local level as at the national level. At all levels, chiefs must favour the ministry of religious advisers towards the young people they are responsible for. It is important for religious advisers to deepen their knowledge of the scout method so that they may take the scout and guide specificities into account in their pastoral work, without substituting the lay chiefs in their task. Youth, more particularly young chiefs, must not simply be considered as the object of the pastoral solicitude of the Churches: they must be encouraged to become what they really are, that is to say active subjects partaking in the evangelisation and social renewal of the world that surrounds them.

ART. 6. If several Christian confessions exist in the same country, scout and guide units belonging to the various Christian Churches may coexist in a same association, each group welcoming members of a same Church. Yet, exceptionally, a young Christian boy/girl may integrate a unit belonging to another Christian confession than the one in which he/she was baptised, should no group of his/her confession exist nearby. In this case, chiefs will carefully inform the young boy/girl’s parents about the confessional aspect of this group; they will also make sure that the parents agree to their child’s integration into this unit. As soon as possible, the national association settles a religious animation team for each Church, with chiefs and religious advisers, in particular in order to be in conformity with the faith pedagogy and main lines of the respective Churches. The national association will carefully control that each Church is duly represented in the local and / or national leading teams of the association.

ART. 7. At the age of education, which is childhood and adolescence, we cannot mix regularly, without any need, youths of different confessions without taking the risk of putting them on the way of relativism or scepticism. No inopportune mixture must happen on the pretext of unity: at this age, it is indispensable that everyone should remain, fully and totally, in the faithfulness to his / her Church, giving thus a true and sincere testimony of the faith he is proud of, with good reasons. But European Scouting offers to rovers and rangers, who are going to enter adult life, possibilities of inter-confessional meetings, the benefit of which should not be lost. At the chiefs’ level, such a dialogue is not only fruitful but indispensable: in front of the various materialisms that reign around us, either of Marxist origin or other, in front of the development of sects and religious indifference, they have the duty to work actively at building a human net that will testify to the universality of Jesus Christ’s Church in the world.

ART. 8. In any occasion – for instance during camps and meetings gathering F.S.E. associations or groups belonging to different Churches -, all facilities must be given to the religious advisers to meet young people on the very place of the camp, to take part in the ceremonies, meals, vigils, camp fires and meetings of all kinds. The camp leaders must remember that their first task is to facilitate the spiritual life of those they are responsible for, and to make sure they take part in the religious services according to the rules of their confession. They will take any useful decision in order to assure the celebration of the Mass at least each Sunday for the Catholics (if possible even every day during the camp), to assure the celebration of the Divine Liturgy for the Orthodox and the Cult for Reformed believers. The liturgical celebrations as well as the Cults will not be celebrated in common. The doctrinal reflections regarding ecumenical questions must be done according to the norms of the respective Churches.

ART. 9. When a national F.S.E. association opens itself to other Christian confessions, it does not mean that it loses its character of education movement of its own confession. But, on the other hand, the other Christian confessions must be able to assure integrally the religious formation of their members with the same rights and the same guarantees as the national association itself. The following guarantees are assured to them:
. creation of a religious animation team taking part in the councils of chiefs, at the various levels, according to the rules of the national association ;
. freedom, for each confession, as regards the formation of chiefs and youth :
– to create badges of religion and religious tests compulsorily integrated to the technical programmes of the scout formation for each level ;
– to organise training camps, respecting the usual pedagogical guarantees, or, if these guarantees cannot be assured, to belong to the staff of the training camps ;
– to gather the young people, the chiefs and the religious advisers for common events such as meetings of chiefs, pilgrimages, retreats, etc.
– to issue magazines of spirituality or doctrinal formation and magazines with a confessional aspect for the use of the religious advisers, chiefs and youth. 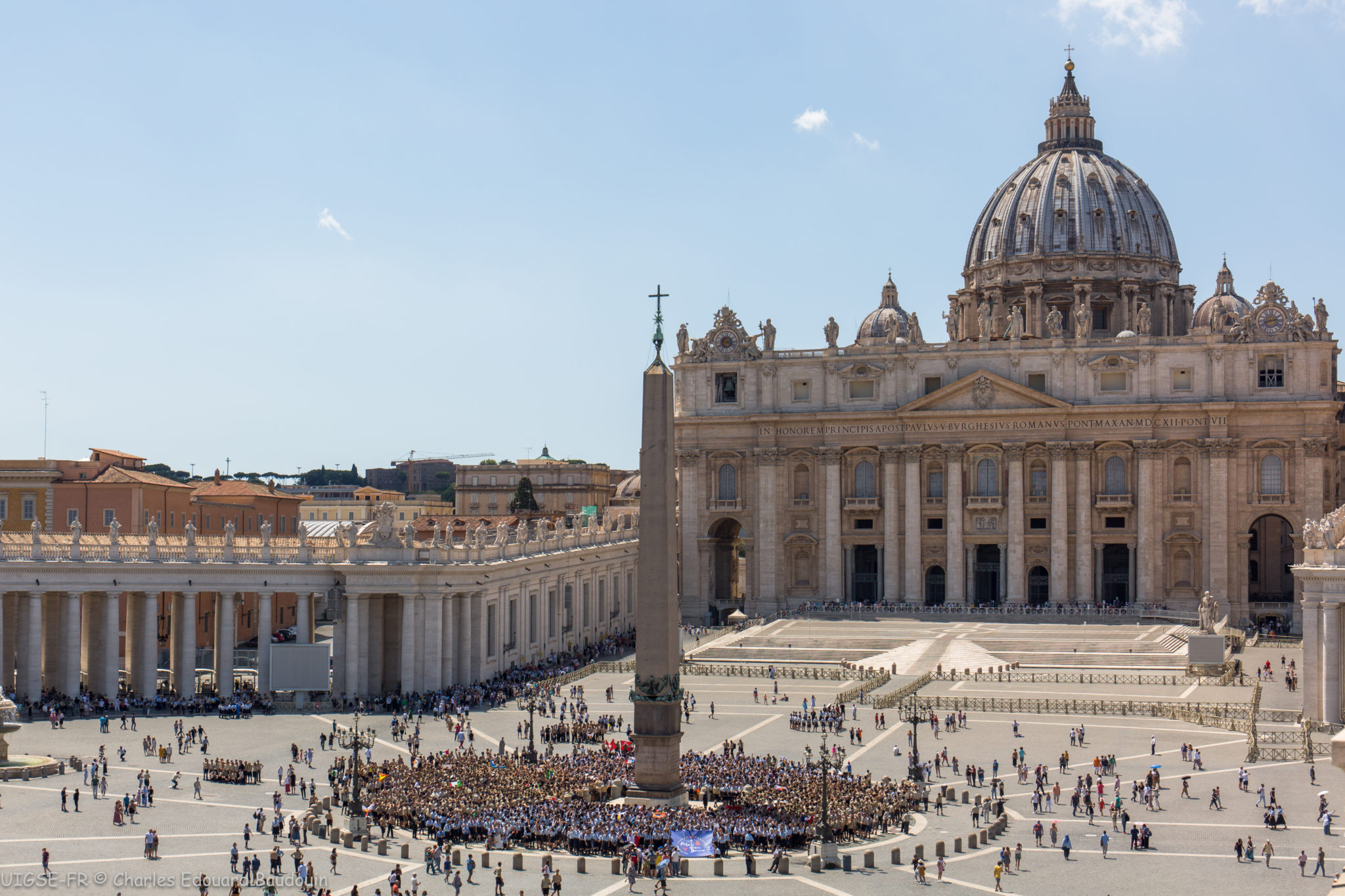