1.1.1. The international organisation so-called “UNION INTERNATIONALE DES GUIDES ET SCOUTS D’EUROPE (F.S.E.)” (International Union of European Guides and Scouts, Federation of European Scouting), is a private international organisation of faithful under Pontifical law. Apart from the norms of these statutes, the Union is ruled by the canonic law in effect. In these statutes, it is generally designated by the term of Union or by the acronym UIGSE-FSE.

1.1.2. Any change to the present statutes will be done according to the norms of the Rules and will have to be approved by the Pontifical Council for Laity.

1.1.3. The UIGSE-FSE is open to the national associations that will adhere to the present statutes.

1.2.1. The Union aims at gathering, in one same community of faith, prayer and action, the various national associations of the European Guides and Scouts, the fundamental objective of which is to educate young people by using Baden Powell’s traditional scouting methods, based on the Christian values at the roots of our common European civilisation.

1.2.2. Beyond country borders, the Union wants to create a true community of Christian life for the youth of Europe’s various countries, and thereby to raise their awareness of belonging to a European community while developing, at the same time, a healthy culture of all national values, which are the diverse expressions of our common heritage.

1.2.3. Considering that party politics should not be the business of young people, the Union declares itself fully independent from any political body. It assesses, all the more forcefully, the general need to educate youth to be good citizens following Baden Powell’s scouting principles, and more particularly to educate to European citizenship which the Union intends to promote according to its particular aims.

1.2.4. The UIGSE-FSE wants to offer to youth :
– the sense of God and a Christian formation ;
– the sense of love and of service to one’s neighbour
– the formation of character and of personality ;
– manual hability and sense of concrete ;
– physical development.

1.2.5. The UIGSE-FSE believes in the supernatural, personal and unique destiny of each man and consequently refuses any social conception leading to any phenomenon of massification or collectivisation sacrifying man to society.

1.2.7. The UIGSE-FSE gives the primacy to each Christian’s vocation to holiness. A Scout or a Guide has to be faithful to his Promise, his Principles and his Law according to the requirements of the Sermon on the Mountain, which is the true Charter of his whole Christian life.
In this sense, the UIGSE-FSE is called to be more and more a means of sanctification within the Church, a means favouring and encouraging a more intimate union between its members’ concrete life and their faith.

1.2.8. The UIGSE-FSE considers that a differentiated education for boys and girls within homogeneous units constitutes an essential point of its pedagogy.
A parallel and a mutual enrichment of both sections, male and female, enable a full development of the aptitudes and propensities given to each sex by God’s providential plan.
As the Law states it, the Scout or the Guide is a friend to all and a brother / sister to any other Scout / Guide. Relying on this, the UIGSE-FSE has its place within the big family of Scouts and guides and works to settle with them, according to Baden Powell’s spirit and original educational project, a more just and fraternal society.

1.2.9. The Union is composed of Catholic scouting associations. It acts and makes decisions according to the rules of this faith.

1.2.10. It is desirable that the catholic associations which are members of the Union should be acknowledged by the Bishops of their countries or by their national Bishop Conference.

1.2.11. With an open mind towards ecumenism, the Union welcomes associations belonging either to one of the Orthodox Churches, or to one of the Church Communities issued from the Reform confessing the Divinity of Christ and recognising the Symbol of the Apostles as definition of faith, adhering with full awareness to the fact that the Union is acknowledged canonically by the Catholic Church.

1.2.12. In a country where several Christian confessions exist, scout or guides units belonging to the various Churches or Communities may cohabit within a same association, each group welcoming the young people belonging to the same Church or Community, according to the norms of the Rules.

1.2.13. The youth’s full religious development requires that their chiefs should belong to the same Church or Community as theirs, should profess the same doctrine, should take part in the same liturgical and sacramental life.

1.2.14. Some non Christian young people may be exceptionally admitted within the units, on condition that their parents have previously accepted to recognise the confessional character of the Group.
No one may pronounce his Scout or Guide promise if he is not baptised. However, a Scout or a Guide may be admitted to pronounce his Promise if he is involved in the catechumenate.

1.3.1. The Promise, the Law, the Principles are at the basis of scouting. All UIGSE-FSE associations adopt, each one in the language(s) of its own country, the following texts, the authentic text being the French one.

Scout Promise
On my honour, and with the grace of God, I promise :
– to do my best to serve God, the Church, my country and Europe,
– to help my neighbour at all times
– and to observe the scout law.

Guide Promise
On my honour, and with the grace of God, I promise :
– to do my best to serve God, the Church, my country and Europe,
– to help my neighbour at all times
– and to observe the guide law.

Scout Law
1. A scout’s honour is to be trusted.
2. A scout is loyal to his country, his parents, his leaders and to those who depend on him.
3. A scout is made to serve and save his neighbour.
4. A scout is a friend to all and a brother to every other scout.
5. A scout is courteous and chivalrous.
6. A scout sees in nature the work of God : he likes plants and animals.
7. A scout obeys willingly and does not half do things.
8. A scout controls himself: he smiles and sings even under difficulties.
9. A scout is thrifty and takes care of his own possessions and those of others’.
10. A scout is pure in his thoughts, his words and his acts.

Guide Law
1. A guide’s honour is to be trusted.
2. A guide is loyal to her country, her parents, her leaders and to those who depend on her.
3. Aguide is made to serve and save her neighbour.
4. A guide is good to all and a sister to every other guide.
5. A guide is courteous and generous.
6. A guide sees in nature the work of God: she likes plants and animals.
7. A guide obeys willingly and does not half do things.
8. A guide controls herself : she smiles and sings even under difficulties.
9. A guide is thrifty and takes care of her own possessions and those of others’.
10. A guide is pure in her thoughts, her words and her acts.

The scout’s Principles
A boy scout’s duties start at home.
Faithful to his country, a boy scout favours a united and fraternal Europe.
As a son of Christendom, a scout is proud of his faith: he labours to establish the reign of Christ in all his life and in the world around him.

The guide’s Principles
A girl guide’s duties start at home
Faithful to her country, a girl guide favours a united and fraternal Europe.
As a daugher of Christendom, a girl guide is proud of her faith: she labours to establish the reign of Christ in all her life and in the world around her.

The UIGSE-FSE is registered in the Federal Commissioner’s residential country. In case of transfer, it has to respect the national civil right in effect in the new country.

2.3. Norms common to all associations are contained in the Rules.

The Federal Council members include members with deliberative vote and advisory members.

3.3.1. The Federal Council is the sovereign power (decision-maker) of the Union. If it is required by Law, the Federal Council may constitute both the general assembly and the Board of Directors of the international organisation.

3.4.3. The Federal Chairman :
– is the warrant of the application of the Federal Statutes and of the Rules of the UIGSE-FSE ;
– convokes and presides the Federal Council and the Federal Bureau ;
– represents the International Union towards the Holy See and, in particular, at the Pontifical Council for Laity.

3.4.5. The Federal Secretary is responsible for :

– the administration of the activities organized by the Union ;

– the economic management of the Union.

3.4.6. The Federal Bureau meets at the frequency and conditions indicated in the Rules. It is convoked by the Federal Chairman.

3.5.3. In its external contacts, the Union is validly represented by its Federal Commissioner, except for what is stipulated at item 3.4.3..

3.7.1. The revenues of the Union are composed of the annual membership fees paid by the associations, of the possible sales of magazines or other goods, gifts or possible subventions, possible properties of the Union.

3.7.2. Only the Union funds as above described are used to meet the Union’s liabilities, excluding liability for any of its member associations.

3.7.3. The management of the budget relies on the Federal Secretary.

3.7.4. The control of the accounts is made by an Auditor elected by the Federal Council.

3.7.5. All administrative acts concerning the properties of the Union have to be accomplished so that they may have a civil validity in the country where they are made.

3.7.6. As regards the possible sale of the properties of the patrimony, with a value superior to 1.000.000,00 Euro, the Federal Chairman asks for the concensus of the Pontifical Council for Laity.

4.1. DISSOLUTION OF THE UNION

For the application of the present Federal Statutes, the Federal Council approves Rules with the particularities of the organization and the running of the UIGSE-FSE. 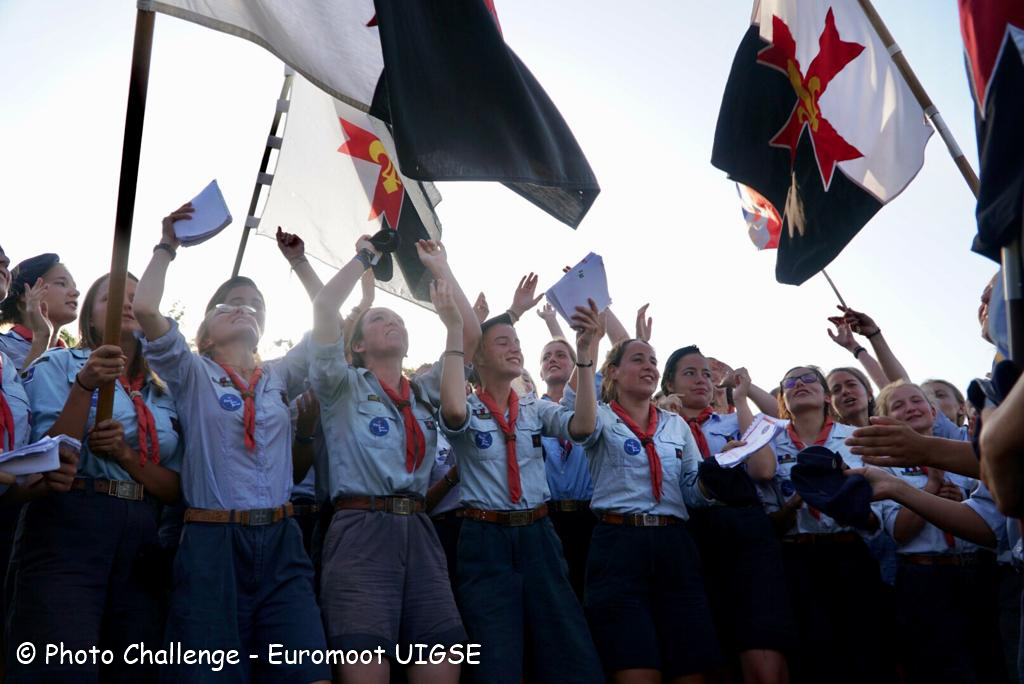