Welcome in the UIGSE, Brazil! 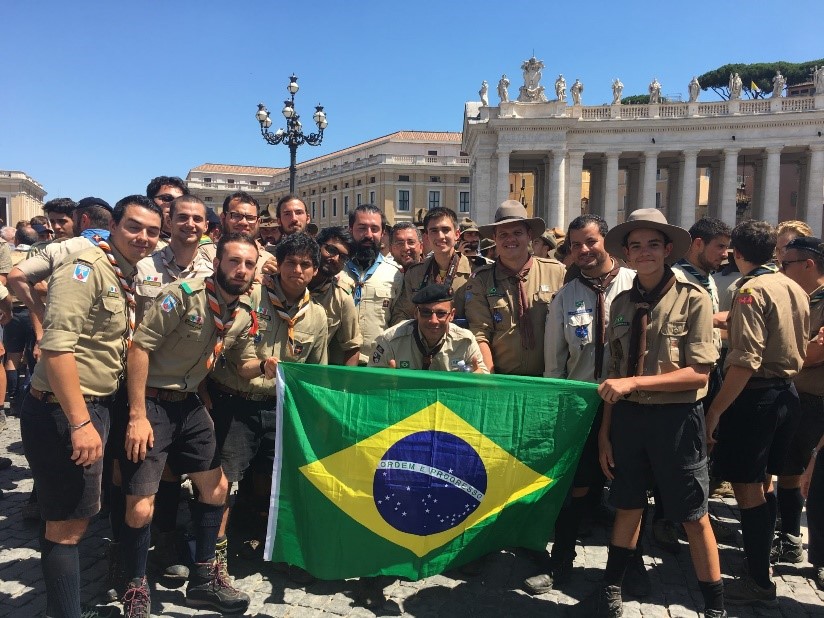 We are very happy to announce you that a new country from South America has joined the International Union of Guides and Scouts of Europe: Brazil!

In December, the Federal Council has indeed officially approved the admission of the Association of Guides and Explorers of Brazil (Associação Guias e Exploradores do Brasil – AG&E) as an observer association. Welcome to them!

A bit of History…

We have to go back to 2011 when a chief from the south of Brazil heard about the existence of a European Catholic Scouting. He contacted then the FSE Portuguese Association (AGEEP) to find out about the possibility of implementing it in Brazil. Step by step, and thanks to several contacts with the UIGSE, this reality has taken shape and aroused several interests throughout all the country.

In the Summer 2019, the participation of 7 Brazilian Rovers to the Euromoot in Italy marked a high point in this progression.

And finally, on 23 April 2020 on World Scout Day, the Association of Guides and Explorers of Brazil (AG&E) made its official request to Bruno Borde, Federal Commissioner of the Union. The association was presented to the Federal Council on 28 November 2020 and officially admitted in th Union on 6 December 2020.

Despite Brazil’s continental dimensions (it is the 5th largest country in the world!), interest in a Catholic scout association soon spread in the five Brazilian regions between 2013 and 2019. Currently, AG&E is present in the States of São Paulo, where the association is located, and has several aspiring and observer groups throughout all Brazil – in Minas Gerais, Rio de Janeiro in the Southeast, the Rio Grande do Sul in the South, Pará in the North, and Distrito Federal in the Midwest – and now has about 140 members in total.

Why becoming member of the UIGSE-FSE?

Brazil has the largest number of Catholics in the world, and AG&E believes the pedagogy of UIGSE-FSE presents itself a concrete means for evangelisation and the active engagement of young people in the Church. AG&E also found in the FSE pedagogy an authentic scouting as founded by Lord Baden-Powell.

The whole Union is happy to see its family grow on the American continent: after the Canada/USA FNE (2006) and Mexico (2017), welcome to you, Brazil! Who will be next?

We are looking forward to our common adventures in the future!